In addition to getting the game polished up more for the Alpha3 release, I’ve been working on polishing up the site itself better.

One thing that’s been pointed out a few times, is that the old dev tracker page was a bit of a mess. Especially at times when there’s a lot of updates, and especially when one bit of content/scripting is updated repeatedly in the same day.

Instead, it now consolidates repeated edits and groups them by the day, so it should be easier to read.
I also added something so I can easily add messages here, since it only automatically tracks changes to game content but doesn’t track things like engine changes, client changes, site updates, and so on. (Eventually, I’d like it to automatically list client changes, but the game server and web server are greatly separated, at the moment) That way I can make small updates where you’d expect to find them when they don’t warrant a new post on the blog right away.

The other update is for probably the most asked question about the game: how much content is in it? 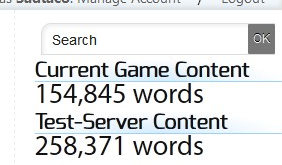 The main page of the site now shows an automated tally of just how much.

The Alpha2 release was ~154k words of content.
On the test server, there is a bit that needs to be deleted and isn’t actually playable, so really that number is about 5-10% less than what it shows there, but suffice to say: we’re looking at at least 50% more content in the upcoming Alpha3 release over Alpha2.
Really, perhaps more than double the content when it comes to some content getting rewritten or removed and replaced. So I’m happy about that, even though I wish we were at this point much sooner.

After the Alpha3 release comes (probably March, as I’m confident I can get the new programming needed done by then, but content being polished up is more iffy), the first open beta release – as in, no more keys needed to play on the main server – will come soon after. I will just be seeing if things are as bug free and polished as I hoped, and I just want to make a new UI and social features (for those that play multiplayer) for the Beta1 release that follows after Alpha3. So, much less to do than had to be done between Alpha2 and Alpha3, thus Beta1 shouldn’t take nearly as long as Alpha3 has been taking.
Originally I wanted around half-a-million words of content in the game for the first open release, but that’s just not feasible now without making people wait longer. Fulca has added quite a lot the past few months, and I’ll be adding more after I get this programming done, but we simply need more writers. Hopefully, it’ll be easier to get more good writers on board when the game is open and easier to get into.

After Beta1 comes, we’ll get to adding more content including more planets to visit, and other areas on the current planets you can explore, hopefully with more writers on the team. I’ll be getting to adding personal player ships, and another feature that’s going to remain secret until I get close to finishing it.
Content will also be moving from the test server to the main server faster. We eventually will have less milestone releases like Alpha1, Alpha2, Alpha3, Beta1, and so on, and the main server will just have bits and pieces transferred from the test server as they are considered ready. It’s not intended to have the main server be outdated as it is now, it’s just how things are at this stage in development.

Getting there, but still a ways to go.

Warning: Unknown: Failed to write session data (files). Please verify that the current setting of session.save_path is correct (/tmp) in Unknown on line 0