My wrists hurt from writing so much code yesterday. -_-

Of all these updates, the big one is for items.
Before, items behavior was hard coded on the client. There was no API or tool to create their behavior. The server also didn’t oversee this behavior. This change, which for now just has things equipable or not, required items to be recoded, which took a few days. There is a whole lot more that can be done with them, I just haven’t thought of what sort of items to add to do those things, or how they pertain to the story.
Below is a screenshot from the dev tool for item creation/editing, so you all can see what you otherwise couldn’t: 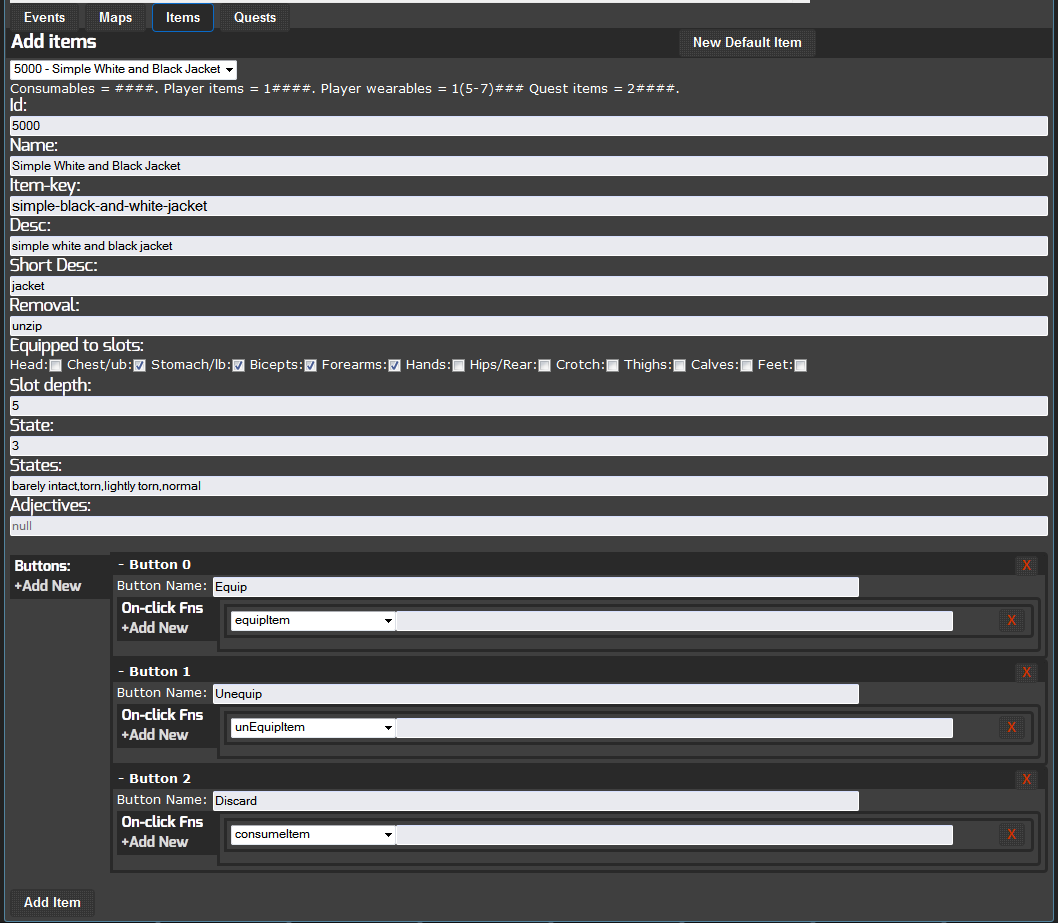 This works just like how functions on scenes work, except they’re triggered by a button press instead of a scene loading.
Multiple functions can be added for each button press, in order to chain things together for a greater effect. This is done on the Phallic Symbiote, to change many things about the character when equipping and unequipping.
These functions are also context sensitive. “consumeItem” with no arguments knows you mean to consume that item that has the button pressed. But another item could be added as an argument, perhaps as a recipe where many items are consumed for something and requiring all of them.

The other difficult part of this was just wrapping my head around how I’m supposed to display descriptions and intelligible phrases in a scene’s writing about what someone is wearing.
In most(all?) text games, your character has an entire outfit that is just removed or put on.
In 3D games, it’s really much easier because you equip some items that attach to the bones for the animation rig, and they limit how thing can overlap. Some newer games have done neater things where mesh intersections are detected, and things can be tucked and such, to overlap things.
Even something like shirt, bottoms, and underwear was too simplistic. What about one piece bodysuits? I had to figure, well what if I want eyepatches and other accessories?
I came up with a system of where clothing has a checklist of what it covers, and an order of its depth for when multiple ones are stacked.
Using this map, the writing parser figures out how to describe what item(s) are over a body part that’s described, and how to describe an overall look.

It’s really not finished. It’s such a complex thing, but at least I figured out where to head with it. As of now, it doesn’t flawlessly detect what should be removed, or if things should be removed at all, but it will in the future. There’s probably some other bugs with it as well.